We are often asked about zebra mussels, an invasive species that's relatively new to Lake Winnipeg's ecosystem. Here are answers to some common questions. 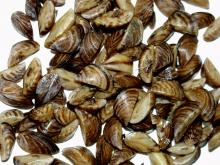 1. What are zebra mussels?

Zebra mussels are D-shaped, fingernail-sized mollusks with light and dark brown stripes. Unlike other mollusks, they have hair-like filaments called byssal threads which they use to attach themselves to hard surfaces such as boats, docks, water-intake pipes and even the shells of other mussels.

Zebra mussels are an aquatic invasive species (AIS) – meaning they are not native to our lake’s ecosystem – and they are able to multiple very rapidly. One mussel can produce up to one million eggs during a single spawning season.

2. When did they arrive in Lake Winnipeg?

Zebra mussels were first reported to the Province of Manitoba in Lake Winnipeg in October 2013. Adult mussels and their microscopic larvae (known as veligers) were found in five harbours within the south basin.

Based on current information, it appears that this species arrived in Lake Winnipeg from North Dakota via the Red River.

4. Does that mean that other lakes in Canada are infested?

Yes. Zebra mussels first arrived in Canada in 1986. They were found in a harbour in Lake Erie, most likely transported from Europe via transatlantic shipping. Within several years, zebra mussels spread throughout the Laurentian Great Lakes. By 1991, zebra mussels began to spread to smaller inland lakes in Ontario and the eastern United States. They are currently found in more than 750 lakes in North America.

Zebra mussels are often unknowingly transported by boaters or other water users who don’t realize mussels or veligers have attached to their equipment. They can also spread via water currents. 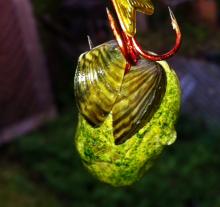 Zebra mussels attached to a rock were caught on the fishing hook of a LWF supporter on Aug. 29, 2015, just south of Balsam Harbour. (Photo: Greg Armstrong)

6. Why are they a concern for Lake Winnipeg’s ecosystem?

The impacts of zebra mussels have been well documented in lakes across Europe and North America. While the degree to which lake ecosystems are impacted is highly variable, there is certainly cause for concern here.

Zebra mussel populations can reach very high densities (more than 10,000 mussels per square meter). This means infrastructure such as docks, water intakes, boats and other solid surfaces are likely to be heavily impacted.

When found in high densities, the mussels can have strong impacts over algae, which are the base of the food web. In some systems, the amount of algae has declined by over 50 per cent, with reverberating impacts to fish and other species that ultimately rely on algae for food.

In some lakes, fisheries have not been largely affected while in others, there have been dramatic declines. Because Lake Winnipeg is so unique, the impacts of zebra mussel on the ecosystem, including the fisheries, will require careful monitoring. 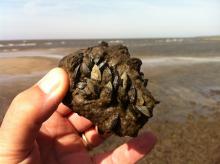 This encrusted rock was found on Sept. 26, 2015, near Balsam Harbour (Photo: Greg Armstrong)

7. How do zebra mussels relate to eutrophication?

The eutrophication problem in Lake Winnipeg is primarily related to cyanobacteria, or blue-green algae. Zebra mussels preferentially feed on other types of algae – in part, because some species of blue-green algae have traits that allow them to escape being eaten. Some blue-green algae grow in long, string-like filaments that are too large to be consumed. Others are able to float at the water’s surface where zebra mussels cannot reach them.

In the Laurentian Great Lakes, zebra mussels also caused some new algae problems. Filamentous green and blue-green algae that grow attached to rocks in coastal areas began to form extremely large blooms, clogging fishing nets and water intakes, and fouling bathing beaches. It is too early to say if this will happen to Lake Winnipeg.

8. What other consequences could result from a zebra mussel invasion?

Zebra mussels are likely to have a large impact on infrastructure such as water-intake lines, boats and boat motors, which will now require routine maintenance/de-fouling. Because mussels grow on hard, rocky lake bottoms, and mussel shells can be quite sharp, swimmers should wear footwear when walking on submerged rocky areas. Users of local beaches may find increases in the accumulation of dead zebra mussel shells on beaches.

Because the mussels primarily inhabit rocky areas and infrastructure around the lake edges, impacts will not be evenly distributed around the lake. Some coastal areas may see improvements in water clarity, particularly between wind storms.

9. What did Manitoba’s government do to try and stop zebra mussels from establishing themselves in Lake Winnipeg? Did it work?

In May, 2014, the government of Manitoba temporarily closed four harbours where zebra mussels had been found in order to treat them with liquid potash, a substance harmless to humans but lethal to mussels. The experimental action was an attempt to eradicate the unwanted mollusks before they could further establish themselves in the lake.

Although the potash treatment did succeed in killing zebra mussel populations in Winnipeg Beach, Gimli, Arnes and Balsam Bay harbours, both adult mussels and veligers have since been detected throughout the lake’s south basin, as well as in the Red River, and the harbours have been re-invaded. In late October, 2015, Manitoba Conservation and Water Stewardship reported zebra mussels are also now present in the north basin of Lake Winnipeg.

10. What can we do now to remove this invasive species from Lake Winnipeg?

Unfortunately, there are currently no technological approaches to eradicate zebra mussels from a lake the size of Lake Winnipeg.

Treatment approaches such as potash, Zequanox (a non-chemical molluscicide) or chlorine may be useful in small lakes or water intakes, however, it is not feasible to use these treatments in large lakes.

The provincial watercraft inspection program has been expanded, mobile decontamination units will be used to clean boats at various locations and “control zones” have been designated in which restrictions can be established to prevent the introduction or further spread of AIS.

In November 2015, the Manitoba government passed new legislation aimed at preventing further spread of zebra mussels and other aquatic invasive species. Just as Manitobans are expected to know and obey speed limits on our roadways, boaters and other water-users must be familiar with the new AIS regulations that protect our waterways.

It is now illegal to transport AIS, aquatic plants or mud on water-related equipment. Boats, boat trailers, and other gear must be decontaminated before being placed in another lake or river (see Question 13 for decontamination protocols).

11. Is the infestation in Lake Winnipeg going to get worse?

It is nearly a certainty that zebra mussels will expand their populations in areas with hard lake bottoms, and move further into the north basin and connecting channels over the next few years. 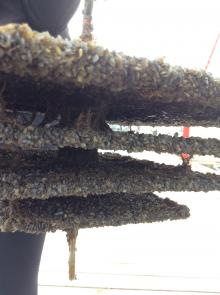 A provincial substrate sampler encrusted in a half-inch thickness of zebra mussels on all surfaces. This sampler was removed from Gimli Harbour in September, 2015, after being left in the water for three consecutive months. (Photo: Manitoba Conservation and Water Stewardship)

12. Have zebra mussels spread to other lakes in Manitoba?

Yes. In 2015, zebra mussels were found in Cedar Lake, located west of Lake Winnipeg, and in the Red River.

In June 2017, a “suspect mussel” was found in Singush Lake in Duck Mountain Provincial Park. (It is considered suspect because it was small, dry and damaged; while experts could not identify the specimen as a zebra mussel, DNA analysis came back positive. However, there is concern the sample may have been contaminated from the lab procedures.)

In December 2017, environmental DNA evidence of zebra mussels were found in Whirlpool Lake in Riding Mountain National Park. Environmental DNA are microscopic genetic traces that an organism leaves behind as it moves through an environment. The lake and campground area are now closed until further notice as a precautionary measure.

Slowing the spread of zebra mussels to other lakes can only be achieved by public action. All water-users must take the following steps before moving watercraft (ex: Jet Skis, canoes), water-related equipment (ex: trailers, removable docks, fishing gear, anchors), aircraft, motor or off-road vehicles from one water body into another water body:

Citizens can also report any sightings of zebra mussels or any other aquatic invasive species by visiting www.manitoba.ca/stopais or by calling 1-87-STOP AIS-0 (1-877-867-2470).

The following resources are provided by the Province of Manitoba: