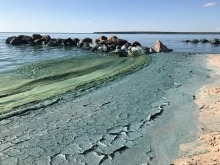 Fresh water in Canada was promised $100 million/year for 10 years in the Liberal Party election platform.

A little over six months later, the federal budget delivered only $19.6 million for a single year.

Just last month, we released a federal report card on Lake Winnipeg. In our review of the past year’s progress, we assigned a B grade in anticipation of the promised renewal of the Lake Winnipeg Basin Program in Budget 2022, as part of a larger federal Freshwater Action Plan.

That grade has been swiftly downgraded to an F with yesterday’s federal budget release. Not only is the funding... 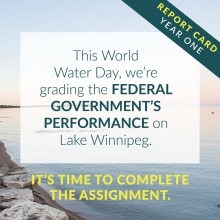 Update: The federal budget was released on April 7 – and the freshwater funding announced within it is shockingly lower than the government’s election commitment. Our report card had assigned a B grade in anticipation of the promised renewal of the Lake Winnipeg Basin Program. That grade has been swiftly downgraded to an F. What does the future hold for regional water-protection initiatives across Canada? Read our Budget 2022 reaction to learn more.

On World Water Day (March 22), LWF and our partners at the Lake Winnipeg Indigenous Collective (LWIC) are releasing a report card which grades the...