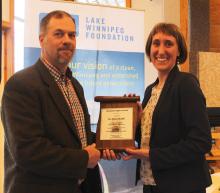 Dr. David Lobb is a soil scientist at the University of Manitoba whose research is focused on understanding and evaluating agricultural practices that affect nutrient and sediment loading to water bodies: from tillage systems to precision farming to integrated water management, in which water drained from agricultural fields is recycled for irrigation.

With a down-to-earth communication style and a commitment to collaboration, David has spent his professional life working with scientists, government staff, conservation districts, farmers and NGOs to find practical, on-the-land solutions for a healthier watershed – and a healthier Lake Winnipeg. 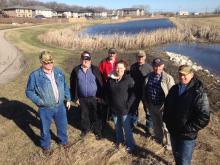 The Seine-Rat River Conservation District (SRRCD) was established in 2002 to promote sustainable watershed stewardship in an area of southeast Manitoba with some of the largest nutrient loads flowing into the Red River and Lake Winnipeg. Since then, it has been involved in many on-the-ground projects including water storage, erosion control, environmental education, water quality testing and integrated watershed management planning.

The SRRCD is actively promoting and supporting best management practices in rural Manitoba, and is an active participant in LWF’s community-based monitoring program.

This was the first time that our award has been given to an organization rather than an individual – and it is fitting, as this grassroots organization exemplifies the spirit of collaboration and determination required to improve local water quality. (Visit the SRRCD’s website to learn more.) 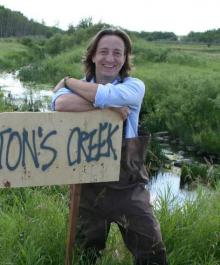 A graduate of the University of Manitoba with a Ph.D in wetland ecology, Dr. Pascal Badiou has been employed as a research scientist with Ducks Unlimited Canada’s Institute for Wetland and Waterfowl Research since 2006. Previously, he worked as an aquatic scientist for North South Consultants.

Badiou is currently leading a study that examines the impacts of wetland loss in Manitoba. Other research in Saskatchewan focuses on quantifying the ecological, social and economic benefits of wetlands in mitigating floods, improving water quality and sequestering carbon. He is also an adjunct professor in the U of M’s department of environment and geography.

Dr. Badiou’s work aligns with several actions of the Lake Winnipeg Health Plan, particularly Action 1, Keeping Water on the Land. He has also been an important contributor to LWF’s ongoing Netley-Libau Marsh restoration project. His current research into the formation of harmful algae blooms will provide new insights into the challenges facing Lake Winnipeg. 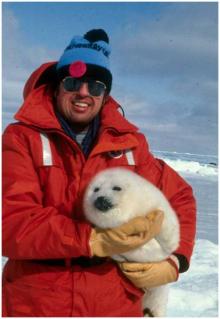 Dr. Lyle Lockart is a bio-chemist who spent his career as a research scientist with the federal department of Fisheries and Oceans’ Winnipeg-based Freshwater Institute until his retirement in 2001. His scientific interests included environmental dynamics and biological effects of trace chemicals such as pesticides, hydrocarbons and mercury, particularly in the far North.

Dr. Lockhart was instrumental in the establishment in 1998 of the Lake Winnipeg Research Consortium, which owns and operates the research vessel, the Namao. He was also a founding member of the Lake Winnipeg Foundation – sitting on its first board of directors and, for the first four years of its existence, acting as its sole scientific advisor. He helped organize the first Red Zone community forum, which saw scientists from across the watershed converge in Winnipeg to discuss lake issues, presented tirelessly on behalf of LWF to governments, media and the public. He remains a member of the foundation’s Science Advisory Council, and his many contributions over the years have helped shape the foundation into the organization that it is today.

Dr. Greg McCullough, a Professor at University of Manitoba Centre for Earth Observations Science (CEOS) was nominated two consecutive years for this award. He is a dedicated research scientist working for the betterment of Lake Winnipeg, largely on his own time and at his own cost. He has forwarded many aspects of our scientific understanding of Lake Winnipeg, but in particular, Dr. McCullough’s work with satellite remote sensing of algae blooms has brought the problem of eutrophication to the people of Manitoba, Canada and the world. 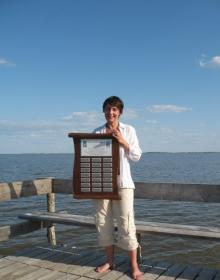 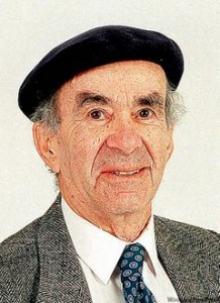