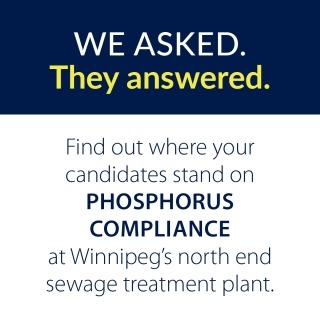 In the lead-up to Winnipeg’s Oct. 26 election, we are urging all candidates to commit to achieving phosphorus compliance at the city’s North End Water Pollution Control Centre (NEWPCC). We expect Winnipeg’s next mayor and council to fulfill the city’s responsibility to Lake Winnipeg.

Together with the Lake Winnipeg Indigenous Collective (LWIC), we reached out directly to all mayoral candidates with an offer to discuss evidence, impacts and solutions to achieve phosphorus compliance at NEWPCC. Since early August, we’ve met with eight mayoral candidates: Chris Clacio, Scott Gillingham, Kevin Klein, Shaun Loney, Glen Murray, Robert-Falcon Ouellette, Rick Shone and Don Woodstock. Everyone we’ve met with agreed that phosphorus compliance at the north end plant is a priority for the city of Winnipeg.

LWIC and LWF also reached out to all civic candidates, sharing our report on achieving phosphorus compliance at NEWPCC and asking the following three questions:

City council approved funding for the updated design of the NEWPCC Interim Phosphorus Removal Capital Project on July 21, 2022. The projected completion date for this project is Aug. 31, 2023.

Will you ensure the NEWPCC Interim Phosphorus Removal Capital Project is completed and operational by Aug. 31, 2023? If not, please explain why you aren’t making this commitment.

City council deferred the estimated $130 million cost to increase digester capacity in the NEWPCC Biosolids Facilities Project to the 2024-2027 multi-year budget process. Winnipeg’s next city council will be asked to approve this funding to ensure the new biosolids facilities can achieve phosphorus compliance.

Will you approve the necessary funding for increased digester capacity in the 2024-2027 city budget? If not, please explain why you aren’t making this commitment.

From your perspective, what consequences do continued algal blooms on Lake Winnipeg have for long-term prosperity and quality of life in the city of Winnipeg?

To help Winnipeg voters make an informed decision on Oct. 26, we’re now sharing what we learned.

Some of the responses we received were exceptional, with candidates demonstrating a thorough understanding of the problem and a very strong commitment to the solution. However, we were surprised that some candidates expressed a sense of helplessness in addressing Winnipeg’s phosphorus contribution to the lake that bears its name. Councillors, working together for the good of Winnipeggers, have an important role to play in maintaining accountability on NEWPCC upgrades.

For far too long, the significance of NEWPCC’s non-compliance and aging infrastructure has been underestimated at city hall – to the detriment of Lake Winnipeg, and Winnipeg itself. Winnipeg’s next mayor and council will make critical decisions about environmental protection for Lake Winnipeg. A solution is finally within reach. What’s needed now is leadership to make it happen.

Below, grouped by electoral ward, we’ve linked to candidates’ responses; click on a name to read that candidate’s response. Note: while the responses we received were formatted for consistency and clarity (font, spacing, etc.), we did not alter candidates’ words in any way.

Note: No responses were received from the ward of Old Kildonan, where councillor Devi Sharma was acclaimed.

NO RESPONSE FROM YOUR CANDIDATE?

We encourage you to engage with civic candidates this election. (Not sure who’s running in your ward? More information is available on the City of Winnipeg’s website.) Ask them to commit to achieving phosphorus compliance at the North End Water Pollution Control Centre. Tell them continued delays are unacceptable.