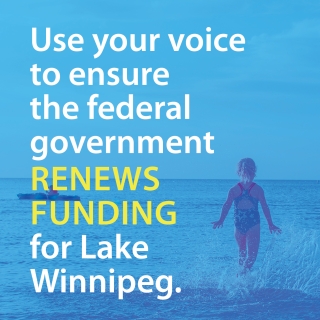 To assist citizens in advocating for renewed federal funding for Lake Winnipeg in Budget 2023, we have created a postcard that can be mailed – no postage required – to the federal minister of Environment and Climate Change. This post has been modified since it was first published in April to include new information.

Fresh water in Canada was promised $100 million/year for 10 years in the Liberal Party election platform.

A little over six months later, the federal budget delivered only $19.6 million for a single year. It’s not clear how much – if any – of this funding will be available for Lake Winnipeg.

In March, we released a federal report card on Lake Winnipeg. In our review of the past year’s progress, we assigned a B grade in anticipation of the promised renewal of the Lake Winnipeg Basin Program in Budget 2022, as part of a larger federal Freshwater Action Plan.

That grade has been downgraded to an F. Not only is the funding amount shockingly lower than the government’s election commitment, it comes with the ominous warning that “the future of this initiative will be communicated at a later date.”

What happened to the “historic investment” that the Prime Minister directed Environment and Climate Change Minister Steven Guilbeault to deliver in his December 2021 mandate letter?

From 2008 to 2022, the federally funded Lake Winnipeg Basin Program invested in regionally focused phosphorus-reduction projects and provided opportunities to ensure meaningful inclusion of Indigenous peoples in water governance – all while being continuously refined by feedback from local stakeholders and government staff.

With ongoing federal support now uncertain, the future of Lake Winnipeg is in jeopardy. We are at risk of losing the progress achieved over 15 years of collaborative effort funded by the Lake Winnipeg Basin Program.

We cannot allow our federal government to fail Lake Winnipeg again. We expect Canada’s decision-makers to keep their promises – and we expect to see a renewed $1 billion Freshwater Action Plan in Budget 2023.

How you can help:

Join us in advocating for renewed federal investment in Lake Winnipeg.

Express your disappointment in Budget 2022 and ask for the renewal of the Lake Winnipeg Basin Program in Budget 2023 as part of a fully funded federal Freshwater Action Plan.

Here is an example of an effective message:

I am reaching out to let you know how disappointed I am to see a reduction in funding for Lake Winnipeg in Budget 2022.

Instead, Budget 2022 allocated only $19.6 million to the Freshwater Action Plan – and for only a single year.

From 2008 to 2022, the Lake Winnipeg Basin Program invested in regionally focused research and collaborative phosphorus-reduction initiatives. This program has been a critically important part of the solution for Lake Winnipeg.

By not following through on promised funding for the Freshwater Action Plan in Budget 2022, your government has jeopardized progress made over the past 15 years through the Lake Winnipeg Basin Program to address the eutrophication of Lake Winnipeg.

To remedy this shortfall, I am calling on you and your government to ensure Budget 2023 includes a renewed, 10-year funding program for Lake Winnipeg, with dedicated regional support for evidence-based phosphorus reduction, and recognition of Indigenous water rights and knowledge.

Lake Winnipeg is Canada’s Great Lake of the West. Please fulfil your mandate to protect it.

I would appreciate a reply to this email.

Remember to be clear and concise with your message, and customize your comment as much as possible; if you have a personal connection to Lake Winnipeg or have experienced algal blooms firsthand, make sure to mention it!

NEW: We’ve created a postcard that can be filled in and mailed – no postage required – to Minister Guilbeault. This postcard can be found in each printed copy of our Spring & Summer 2022 newsletter, and extra postcards are also available for free through the LWF office. If you would like postcards to distribute to your networks, please contact us!

There is no stronger force in politics that the force of public opinion. Lake Winnipeg needs your help! Use your voice to secure funding for our great lake’s protection.