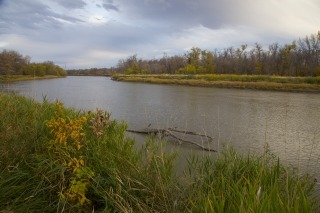 On Sept. 16, the International Joint Commission (IJC) announced it had submitted its recommendations on proposed Red River nutrient targets to the governments of Canada and the United States.

The IJC’s decision to recommend nitrogen reduction as a strategy to reduce the frequency and severity of algae blooms is disappointing, confusing and problematic – and it is counter to the best-available science. It also contradicts feedback given as part of a public consultation process held earlier this year, when LWF and others advocated against proposed nitrogen objectives.

Reducing nitrogen loading will have no impact on reducing algae blooms in Lake Winnipeg.

Cyanobacteria, more commonly known as blue-green algae, rely on dissolved reactive phosphorus in the water to grow, and pull their own nitrogen from the atmosphere – literally out of thin air. This is one of cyanobacteria’s incredible evolutionary advantages, and it’s the reason why reducing nitrogen doesn’t reduce potentially toxic blue-green algae.

To meaningfully address eutrophication, science tells us that we must focus on phosphorus.

The connection between phosphorus and the growth of potentially harmful algae blooms in freshwater ecosystems has been conclusively demonstrated over five decades of scientific research at the world-renowned International Institute for Sustainable Development - Experimental Lakes Area.

Not only is the IJC’s decision to propose nitrogen limits for the Red River not evidence-based, it contradicts the commission’s own approach to improving water quality in Lake Erie – another large Canadian lake challenged by eutrophication. In its 2014 report “A Balanced Diet for Lake Erie,” the commission states that “the single most important solution for the restoration of Lake Erie water quality is the reduction of phosphorus inputs.”

At best, setting nitrogen targets for the Red River will have no beneficial effect on downstream water quality. At worst, it will distract us from making effective use of limited resources and delay much-needed action to improve the health of Lake Winnipeg.

The IJC’s mandate is to prevent and resolve transboundary water disputes by investigating issues and recommending solutions to the governments of Canada and the United States. Its advice is not binding, and it is now up to both federal governments to decide whether to approve the Red River nutrient targets as presented.

LWF will continue to advocate for decisions based on data – and that means focusing on phosphorus to improve water quality in Lake Winnipeg.

To read our full IJC submission on proposed nutrient targets for the Red River, visit our “Resources for Citizens” web page.