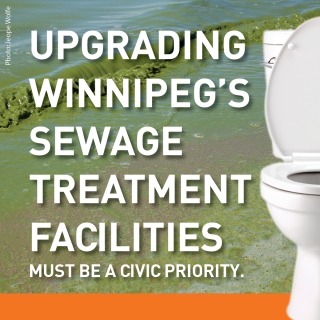 The North End Water Pollution Control Centre (NEWPCC) treats approximately 70 per cent of the city’s wastewater. The NEWPCC is currently the fourth largest phosphorus polluter among all wastewater treatment facilities in Canada and the single-largest point source of phosphorus flowing into Lake Winnipeg.

Phosphorus is the nutrient responsible for potentially toxic algae blooms. Under its provincial operating licence, the City of Winnipeg is compelled to reduce phosphorus in NEWPCC effluent to 1 milligram per litre (mg/L), based on a 30-day rolling average, by Dec. 31, 2019.

“Scientific research conducted at IISD Experimental Lakes Area over the last 50 years has definitively proven the connection between excess phosphorus and algae. This ground-breaking work rewrote policies around the world to address eutrophication in freshwater lakes,” says Dimple Roy, director of water policy for the International Institute for Sustainable Development.

“In the 1980s, municipalities around Lake Erie invested in improvements to their sewage treatment systems to remove higher levels of phosphorus from their effluent. For decades, these jurisdictions have been meeting – and, in some cases, exceeding – the 1 mg/L phosphorus limit. Meanwhile, Winnipeg lags further and further behind.”

The City of Winnipeg has committed to fully upgrading the NEWPCC. However, experts estimate this upgrade will take 10 years or more to complete and cost an estimated $1.4 billion.

An interim retrofit to the NEWPCC modelled on methods currently used in other cities could be applied quickly at low cost – reducing phosphorus in the water that flows into Lake Winnipeg until permanent plant upgrades can be completed.

Many jurisdictions around Lake Erie use a simple chemical addition in their wastewater treatment processes to remove phosphorus.

“Using ferric chloride – a chemical variant of iron – is extremely common across the Great Lakes region and beyond. Including this step as standard practice has enabled plant after plant to easily meet increasingly stringent phosphorus limits,” says Dr. Glen Daigger, professor of Engineering Practice at the University of Michigan and researcher with the Great Lakes Water Authority, which oversees sewage treatment for approximately 3 million people.

The NEWPCC already uses ferric in other aspects of its operations and could optimize the value of this chemical simply by adding it earlier in the treatment process as a phosphorus-removal agent.

“Installing an interim ferric system at Winnipeg’s north end plant is absolutely doable by Dec. 31, 2019,” Daigger says. “Most significantly, it would result in a substantial reduction of phosphorus right away, not 10 years from now. When you’re talking about bang for your buck, this is a quick fix for a quick win.”

“Citizens are not prepared to wait another decade,” she adds. “Our civic government must make clean water a priority today. It’s time to truly take responsibility for Winnipeg’s impacts on the great lake in our own backyard. Practical solutions are right at hand – let’s use them.”

Want to learn more? Here are some additional resources:

*Between Sept. 19 and 28, 2018, Probe Research surveyed a random and representative sampling of 1,116 adults residing in Manitoba. Results are within ±2.9 percentage points of what they would have been if the entire adult population of Manitoba had been surveyed.