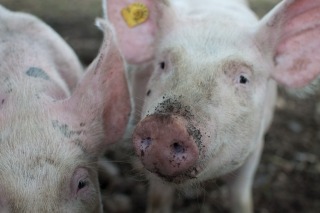 Update 2: Presentations on Bill 24 have been rescheduled; the committee will now meet on Monday, Oct. 23, and Tuesday, Oct. 24.

Update: The Standing Committee on Social and Economic Development is set to meet on Wednesday, Oct. 25, and Thursday, Oct. 26 to hear public presentations on Bill 24. LWF has registered to present. We urge all our supporters to contact their MLAs in advance of these meetings.

In March 2017, the provincial government announced plans to lift restrictions preventing the expansion of Manitoba’s hog industry, a move that would enable new and expanded barns to be built across the province.

Yet Manitobans are not convinced that the industry will be effectively regulated if it expands. In a recent online survey conducted by Probe Research*, 54 per cent of respondents expressed a lack of confidence in the Manitoba government’s ability to properly regulate hog barns in order to protect water quality, including that of Lake Winnipeg.

Manitobans are also confused about the potential implications of the proposed changes. Only 29 per cent felt that new or expanded hog barns should be allowed, while 46 per cent felt restrictions should remain in place and 25 per cent were unsure.

Two sets of changes are in the works, affecting both the regulation and legislation which govern the industry to prevent phosphorus runoff into provincial waterways. Each of these sets of changes has a different process and timeline for approval.

Proposed changes to the Livestock Manure and Mortalities Management Regulation

Proposed regulatory changes to the Livestock Manure and Mortalities Management Regulation (LMMMR) were announced this spring and the public was invited to submit feedback on a brief consultation document.

In our response to this consultation, LWF expressed concern that no evidence has been provided to support the proposed changes. Past calls for an independent regulatory review have not been addressed, and no water-quality data have been shared to demonstrate the efficacy of manure management plans – the tool by which government currently regulates the application of manure.

Many Manitobans share LWF’s concerns. A total of 137 unique public responses were received through the government’s consultation process. Of these, 97 per cent expressed concern with the proposed changes. (You can read all the public comments here.)

Only four submissions (3 per cent) expressed unqualified support for the changes. All four were from agricultural industry associations.

Of those who expressed concern:

A surprising number of submissions (7 per cent) questioned the quality and adequacy of the consultation process itself, stating that additional information and public meetings were necessary to ensure citizens could contribute meaningfully to such a process.

Respondents also questioned the intent of the consultation document itself, which emphasized that the changes were designed “to help facilitate the growth of the livestock industry.” One submission pointed out that this goal is inconsistent with the primary function of the department of Sustainable Development as outlined in the Environment Act: “to protect the quality of the environment and environmental health of present and future generations of Manitobans.”

All public submissions are currently being reviewed by policy-makers, but it is not yet clear how this input will impact the government’s proposed changes. Regulatory changes can be approved by the minister or by cabinet without needing to go before the legislative assembly.

Proposed legislative changes, introduced through the government’s Red Tape Reduction and Government Efficiency Act (Bill 24), will remove two provisions from the current Environment Act: one requiring that an anaerobic digester be installed in all new and expanding barns to manage manure volumes, and a second banning spreading of manure between Nov. 10 and April 10, when frozen, snow-covered or saturated ground prevents manure nutrients from being absorbed into the soil.

Bill 24 is expected to come before the legislative assembly when it resumes its session on Oct. 4. Once it has passed second reading, it will be debated in committee. Citizens are invited to present to the committee to inform debate about this bill. You can learn more about presenting to committee here.

LWF calls for an evidence-based approach

Our provincial government has repeatedly assured its voters that its decisions are made using a science-based approach, yet water-quality data are not available to inform the proposed changes to hog industry regulation.

LWF will continue to advocate for evidence-based decision-making in order to protect and restore the health of Lake Winnipeg. We acknowledge the economic importance of the hog industry to local producers, communities and the province. Lake Winnipeg is also an important resource. Before undertaking any amendments to regulation or legislation governing the hog industry, it is the responsibility of the government of Manitoba to provide its citizens with robust evidence demonstrating that increased manure application to agricultural fields as a result of expansion of the hog industry will not increase phosphorus loading to Lake Winnipeg.

Speak up for water. Express your concerns by:

Here’s an example of a short-but-effective submission:

“I live in your constituency. Water is very important to me as a citizen of Manitoba – and as a voter.

I understand that the government is proposing changes to existing legislation and regulation that will allow for the expansion of Manitoba’s hog industry. Water-quality data to support these changes are lacking.

When it comes to the future of my province, I expect my government to make decisions based on science. Lake Winnipeg is an important resource. I strongly urge this government to provide its citizens with robust data before making any changes that could jeopardize the health of our water.”

Remember to customize your comment as much as possible. Share your personal connection to the lake, and aim to be clear and concise with your message.

*Probe Research surveyed 1,032 Manitoba adults between Aug. 8 and Aug. 20, 2017 using a web-based survey platform. Because an online survey is a sample of convenience, no margin-of-error can be ascribed. However, a random and representative non-convenience sample of 1,032 adults would have a margin of error of ± 3.1 percentage points, 19 times out of 20.

Minor statistical weighting was conducted to ensure that the sample of respondents closely reflects known demographic characteristics of the entire adult population of Manitoba.