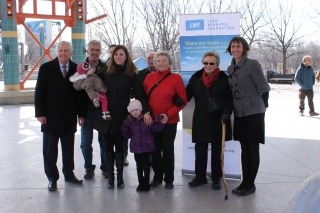 Winnipeg – Today, on the final day of Canada Water Week 2015, LWF marks its ongoing commitment to a clean, healthy Lake Winnipeg by signing the Lake Friendly Accord.

LWF was founded 10 years ago in 2005 by a passionate group of volunteers. The foundation has been a part of Manitoba’s Lake Friendly Stewards Alliance since the provincial initiative’s inception in 2013. The goal of the Accord is to improve water quality by reducing nutrient loading to rivers and lakes. Excessive nutrients such as phosphorus are contributing to the increasing size and frequency of harmful algae blooms in Lake Winnipeg, the 10th largest freshwater lake in the world.

“In signing this Accord, LWF renews our commitment to our Lake Winnipeg Health Plan, which translates science into action for a healthy Lake Winnipeg,” says Alexis Kanu, LWF’s executive director.

“Lake Winnipeg is a very special place for us and for many other families,” says Janet Sampson, one of the people in attendance at today’s event. For the past nine decades, four generations of Sampson’s family have spent their summers enjoying lake life at their Victoria Beach cottage, built in 1924.

“We’re concerned by the changes over the years that jeopardize the health of the lake,” Sampson says. “We are LWF supporters because we have faith in the future and we want to be part of the solution.”

“Leadership starts at home,” Kanu says. “The health of Lake Winnipeg is at a tipping point. The future of this iconic body of water depends on the steps taken today. With today’s commitment, we are creating a legacy – now and for future generations.”