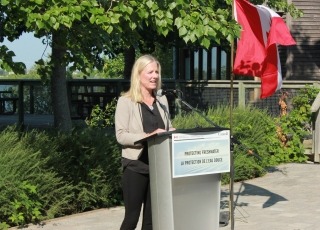 On July 24, Canada’s Minister of Environment and Climate Change, Catherine McKenna, announced that the federal government will invest $25.7 million in the Lake Winnipeg Basin Program, which is part of the $70.5-million funding allocated for freshwater protection in Budget 2017.

The Lake Winnipeg Basin Program will focus on three priorities, according to ECCC’s press release:

Many details about the new funding are still unknown at this time – including how this $25.7 million will be allocated across the watershed and which organizations will receive project funding. We expect to hear further details in fall 2017.

Some of this funding will support Environment and Climate Change Canada’s ongoing science and governance responsibilities in the basin, to ensure that freshwater protection programs are able to effectively carry out their mandate. In addition, stakeholders including researchers, conservation districts, community groups, First Nations, environmental NGOs and others will likely be able to apply for project-based funding.

This newly announced funding builds on past programming made possible through the Lake Winnipeg Basin Initiative, which saw $36 million of federal money invested from 2007 to 2017 in a variety of water-related initiatives.

An evaluation of the Lake Winnipeg Basin Initiative from 2012-2017, released yesterday, highlighted the ongoing need for federal leadership and resources to protect Lake Winnipeg, a freshwater resource of national importance. The report also noted that, to date, success in reducing nutrient loading to Lake Winnipeg has been limited, and recommended a renewed federal effort to achieve this outcome.

At LWF, our members have been taking action to restore and protect Lake Winnipeg since 2005. We recognize that the health of our shared waters is our collective responsibility – and we take that responsibility seriously. We have been proactive in our efforts: raising money to support research projects and educate Manitobans, advocating for change, and most recently, mobilizing a citizen-scientist network to identify and target phosphorus hotspots on the landscape.

This latest financial investment is an important demonstration of federal leadership on Lake Winnipeg. We are encouraged that Minister McKenna understands the need for evidence-based solutions and for increased engagement of Indigenous peoples.

We are optimistic that this new funding will be used strategically to identify strengths across stakeholder groups, leverage those strengths and ensure accountability towards achieving meaningful outcomes. We will continue to speak up for water and bring the concerns of lake-lovers to the tables of decision makers.