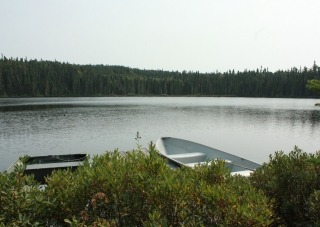 Located in northwest Ontario about an hour and a half east of Kenora, the IISD Experimental Lakes Area (IISD-ELA) is a natural laboratory comprised of 58 small lakes and their watersheds. The area was set aside for scientific research in 1968 and it’s an ideal setting in which to conduct whole-ecosystem science: the lakes are pristine and the surrounding region has very low human influence.

It’s also an idyllic place. Getting to the facility involves a drive down a winding, loosely maintained gravel road that’s lined on both sides with thick forest of birch and pine trees and the occasional outcrop of lichen-covered Canadian Shield rock. Black bear country. Fall had begun to descend on the Wednesday that LWF staff paid a visit; surrounded by the rich golds, burnt oranges and deep reds of the turning foliage, we collectively agreed that this might be the most beautiful workplace in the world.

Make no mistake, however – fresh air and tranquility aside, lots of work does takes place here. More than 50 whole-lake experiments have been conducted since IISD-ELA was created, and the research done here over the years has contributed to more than 1,000 peer-reviewed scientific publications.

At any given time, about 15 lakes are in use, either for active experiments or for observation, whereby scientists monitor everything from temperature to fish populations to oxygen levels to evaporation rates; these samples serve as controls, just like in any other lab situation. Five IISD-ELA lakes have been in long-term use – including Lake 227, in which an experiment on eutrophication has been running since 1969.

Lake 227 is a big deal in the freshwater world. Sure, Lake 226 might be more famous, it being the lake featured in the iconic 1973 photograph in which a non-permeable membrane separates normal-looking water from the algae-choked green slurry caused by excess phosphorus. But Lake 226 has long since been remediated back to its natural state. On Lake 227, the action – and the learning – continues.

To get to our destination, we first drive back down the gravel road to Roddy Lake, used primarily by IISD-ELA’s research scientists as an aquatic highway to get to other lakes. A 15-minute boat ride gets us to Lake 305 – monitored by researchers because Lake 227 drains into it – where we board two smaller boats for another trip. That’s followed by a short hike through the forest.

Lake 227 is just five hectares in area and only 10 metres deep. It’s small by lake standards, especially when your frame of reference is Lake Winnipeg, the 10th largest freshwater lake in the world. Every Monday, researchers make the trek to its shores, don safety equipment and dump a small amount of pure phosphoric acid into its waters. (Fun fact No. 1: Only about $300 worth is used each year. Fun fact No. 2: It’s kosher.)

Though monitoring has been ongoing for almost 50 years, the eutrophication experiment has changed. Originally, researchers were adding nitrogen and phosphorus. Once the Lake 226 experiment demonstrated a definitive connection between phosphorus and algae blooms, the amount of nitrogen added to Lake 227 was slowly decreased until 1990, when scientists stopped adding it completely. Despite a 100 per cent reduction in nitrogen inputs, no changes were observed in the algal biomass in Lake 227. What did change were the types of algae that thrived: increasingly, cyanobacteria, or blue-green algae, dominated, because they can access nitrogen from the atmosphere (a process scientists call “fixation”).

It’s hard to compare Lake Winnipeg’s algae problem with what’s happening Lake 227. For one, although Lake 227 is considered eutrophic, it’s far less so than other water bodies, Lake Winnipeg included. That’s because it has high levels of iron, which binds to phosphorus and sinks to the bottom, trapping nutrients in the lake’s sediment where it’s inaccessible to algae. Soluble reactive phosphorus, the form most easily consumed by algae, is virtually non-existent in Lake 227, in part because there are no wastewater plants or other point sources feeding into the lake. What little is present is immediately taken up by algae, which are hungry for nutrients.

Another difference is that the algae in Lake 227 are usually species that don’t float on the surface of the water, which means the lake doesn’t look all that green, though sometimes blooms can be seen from the air.

“It’s rare where you’re permitted to pollute a lake on purpose,” says Scott Higgins, one of IISD-ELA’s on-site research scientists. (Scott is also a member of LWF’s Science Advisory Council and was our guide to Lake 227.) The ongoing research happening here is of great value, he adds; for just one example, decision-makers in charge of regulating Ontario’s cottage country can use Lake 227 data to better understand when to stop development before algae blooms are present.

Future experiments planned for Lake 227 include further study on the relationship between phosphorus and iron, and some predictive modelling work in which researchers will use historical and current data to see if it’s possible to calculate when exactly algae blooms will occur.

That’s the cool thing about IISD-ELA: Its five decades of biological, environmental and meteorological data sets continue to inform new experiments, be understood in new contexts and used in new ways – a particularly exciting prospect given the increasing need to understand climate change and its effects on freshwater systems around the world.

LWF staff had a great time on our tour. Our sincere thanks to the IISD-ELA staff and visiting researchers who took time to chat with us and answer our (many) questions. Their ongoing work is providing us with the evidence we need to take action for the health of our shared waters.

See more shots from LWF’s tour of IISD-ELA below.

Behind the scenes at IISD-ELA

The IISD Experimental Lakes Area (IISD-ELA) is  located in northwest Ontario, and is one of Canada's primary sources of lake science. Since 1968, whole-ecosystem research conducted at the 58 small lakes and watersheds which make up this facility have provided us with the evidence we need to take action for the health of our shared waters. LWF toured IISD-ELA on Sept. 13.