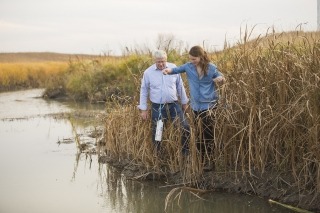 LWCBMN is a growing network of citizens, scientists and conservation professionals. Since 2016, LWCBM volunteers and staff have been collecting water samples across southern Manitoba using scientifically vetted protocols. Samples are then analyzed in a lab to measure phosphorus concentration and determine the amount of phosphorus being exported off our landscapes.

Excess phosphorus is the primary cause of potentially harmful algae blooms which have been increasing in size and frequency on Lake Winnipeg.

In 2017, in its second field season, LWCBMN collected a total of 800 water samples from 75 sites in the East-Interlake, Seine-Rat River, La Salle Redboine, Upper Assiniboine River and Pembina Valley conservation districts. With support from government partners, LWCBMN data is enriching federal and provincial data sets to create a deeper understanding of water-quality trends across the province.

All LWCBMN samples were analyzed by LWF’s CBM Co-ordinator in Agriculture and Agri-Food Canada’s Morden Research and Development Centre, with oversight from LWF science advisors. Data is now being shared back to network partners in accessible, contextualized and actionable reports.

Phosphorus exports (kg/ha/year) for 35 sub-watersheds in southern Manitoba, from 2017 data generated by the Lake Winnipeg Community-Based Monitoring Network. Phosphorus hotspots are in red.

“You can’t manage what you don’t measure,” says Alexis Kanu, executive director of LWF. “In order to take effective action to reduce algae-causing phosphorus, we need to understand where the phosphorus is coming from. LWCBMN data tells us where to focus our time, effort and resources to have the biggest bang for our buck – and create the biggest impact for our beloved lakes.”

Multiple years of LWCBMN data are needed to account for annual variation and ensure real trends are being captured, and LWCBMN data can’t explain why certain areas are phosphorus hotspots. However, LWCBMN is already demonstrating value – providing cost-effective opportunities to identify and target phosphorus hotspots at fine spatial scales for better management of local lands and waterways. LWCBMN data can be also be used to monitor the impact of on-the-ground phosphorus-reduction and water-retention initiatives.

With the imminent arrival of the spring melt in Manitoba, LWCBMN is mobilizing for its 2018 field season: prepping sampling equipment, connecting with volunteers, recruiting and training new members, and identifying new sampling sites. LWCBMN’s 2018 goal is to collect 1,500 water samples. 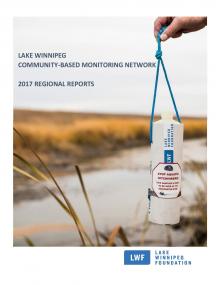 Read the LWCBMN 2017 regional reports below:

If you’re interested in volunteering with LWCBMN, email cbm@lakewinnipegfoundation.org or call 204 956-0436.