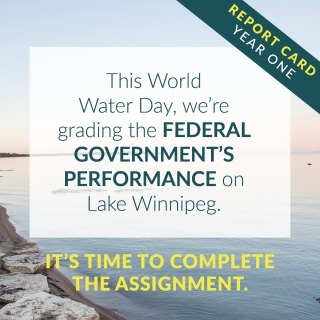 Update: The federal budget was released on April 7 – and the freshwater funding announced within it is shockingly lower than the government’s election commitment. Our report card had assigned a B grade in anticipation of the promised renewal of the Lake Winnipeg Basin Program. That grade has been swiftly downgraded to an F. What does the future hold for regional water-protection initiatives across Canada? Read our Budget 2022 reaction to learn more.

On World Water Day (March 22), LWF and our partners at the Lake Winnipeg Indigenous Collective (LWIC) are releasing a report card which grades the federal government’s performance on Lake Winnipeg.

The Year One report card assesses progress made on recommendations presented in Five Things the Federal Government Must Do for Lake Winnipeg, a discussion paper released by LWF and LWIC in December 2020.

The results? Some progress, one failure – and a need for immediate investment through Budget 2022.

The need to improve the health of Lake Winnipeg has been acknowledged for years through the policy priorities, mandate letters and throne speeches of successive federal governments. We know what we need to do. We have the tools to do it. What’s missing is follow-through.

Under the paper’s five overarching recommendations, we assigned grades to 13 immediate actions – necessary first steps to improve the health of Lake Winnipeg. We received publicly available documents and statements related to federal commitments for Lake Winnipeg, and considered the five-year timeline in which each action can be achieved.

Lake Winnipeg is the world’s 10th largest freshwater lake, and part of the traditional territory of the Anishinaabe, Nehiyaw, Oji-Cree and Dakota peoples, and the homeland of the Métis Nation. Drawing its water from over a million square kilometres, the lake sustains vital ecological biodiversity, drives local economies and livelihoods, and is essential to cultural and spiritual identity.

Today’s report card is a reminder that good intentions, symbolic gestures and funding announcements are not enough. We must draw upon the depth of evidence from scientists and Indigenous knowledge holders to address long-standing and pervasive harms to our shared lake. It’s time for the federal government to follow through on past commitments.

You can read the full report on our website.

Want to communicate directly with key federal decision-makers in advance of Budget 2022? Tag them on social media and tell them you expect targeted investment in Lake Winnipeg

Budget 2022 must invest in Lake Winnipeg. It’s time to complete the assignment.